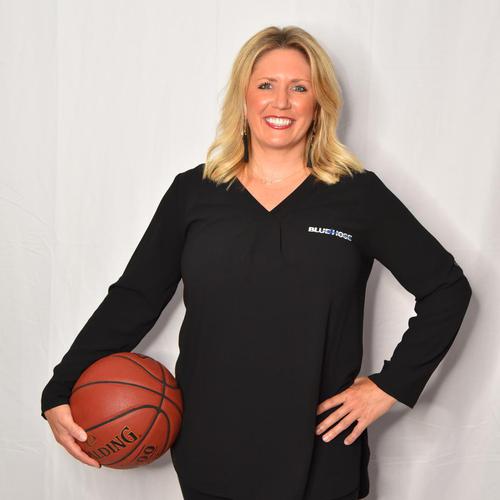 Developing a Competitive Staff and Practices

Alaura Sharp completed her second season as the head women's basketball coach at Presbyterian College in March. Under her leadership, the Blue Hose reached the Big South Quarterfinals in both seasons, falling to top-seeded Radford in a heartbreaker in 2019 and having their matchup against top-seeded Campbell cancelled in 2020.

This past season, PC eclipsed its win totals from the year before and saw three players earn postseason awards. Sophomore Trinity Johnson earned Honorable Mention honors from the Big South, while Tionna Carter earned a spot on the All-Freshman team. Senior Kacie Hall earned All-Academic honors for the second year as well. Johnson finished the season among the top Big South players in several statistical categories including points, assists and field goal percentage while ranking in the top 25 nationally in steals.

Prior to her time at PC, she spent two seasons as an assistant coach with Louisiana Tech and three seasons as an associate head coach at Southern Miss. During those tenures, both teams exceeded external expectations and combined for four trips to the WNIT which includes an Elite Eight finish in 2015.

After a brief stint at Lamar Community College, Coach Sharp hit her stride over four seasons at Garden City Community College where she won 83 games, defeated 11 nationally ranked teams and was named the 2010 KJCCC Coach of the Year. Her 2012-13 team finished with a school record 29 wins and a final ranking of 13th in the NJCAA polls.