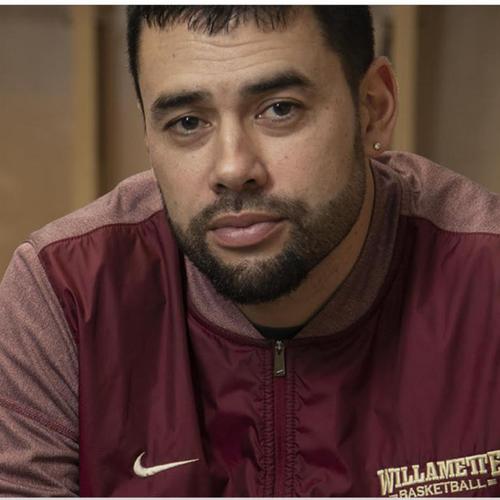 D3 Head Coach entering his 12th season, 8 of which have included utilization of his nationally recognized #TeamsOfMen Character Development Program.

Kip Ioane (pronounced "eye-own") is in his 11th season as the head coach of the men’s basketball team at Willamette University in 2019-20. He is in his 19th season on the coaching staff, including eight years as an assistant coach under Gordie James prior to being named the head coach when James retired prior to the 2009-10 season.

Also in 2018-19, forward Jordan Jenkins was a co-winner of the J.H. Booth Award, which goes each season to Willamette's top senior men's student-athlete in leadership, scholarship and athleticism. Jenkins also was a finalist for the Jostens Trophy, awarded to the nation's top NCAA Division III basketball player based on athletic ability, academic success, and community service. In addition, he earned First Team All-Northwest Conference recognition and Third Team All-West Region honors as a senior, while finishing his career with 1,109 points and 588 rebounds.

In 2014-15, Ioane led the Bearcats to the fourth and final berth into the Northwest Conference Tournament. Willamette earned its spot in the NWC semifinals by defeating Pacific University at Cone Field House on the final day of the regular season.

Ioane also attended Willamette as a student-athlete and played for the Bearcats from 1997-98 through 2000-01. He was a two-year captain who earned a total of four letters while playing at Willamette.

As a senior, he was a finalist for the Josten’s Trophy, given to the NCAA Division III men’s basketball player of the year. Ioane earned a bachelor’s degree from Willamette in 2001 and achieved a Master’s of Art in Teaching at WU in 2002.

While attending Billings Skyview High School in Montana, Ioane was All-Conference and All-State in football, basketball and track and field. Later, he competed in 100 basketball games as a player at Willamette. He helped the Bearcats achieve a combined record of 54-44 during his four seasons.

He became the Pro Hoop Camp director in 2009. Pro Hoop Camp is held during the summer and offers four sessions for youngsters ages 7-17. Ioane stresses individual skill development and team concepts as well as overall attitude. Jersey Day and the "2-minute games" are highlights during each week of the camp.

Ioane’s wife, Kelly (Sorenson) ’01, was a star for WU in volleyball and basketball. She is a member of the Willamette Athletic Hall of Fame. Kip and Kelly are the parents of Lincoln, 12 years old, Leah, age 9 and Xavier, 7 years old.