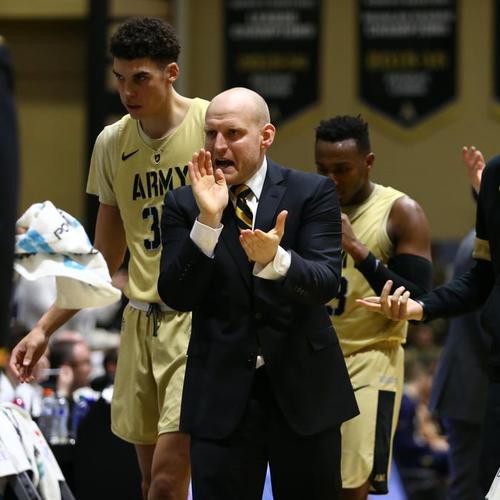 How to Work on Offense

Since Boisvert joined the staff, Army has experienced tremendous success against service academy rival Air Force, playing to a perfect 3-0 record. On Dec. 8, 2018, he helped coach the Black Knights to a thrilling, 66-61, comeback win in Colorado after the team trailed by 17 at the half to the Falcons. This past year, Boisvert also helped coach guard Tommy Funk, the program's all-time leader and single season assists leader, to Third Team All-Patriot League honors.

During the 2017-18 campaign, he aided the Black Knights in taking down service-academy rival Navy in Annapolis, Md., on Jan. 14, marking the third consecutive year that Army has left Alumni Hall victorious.

He helped lead Army to one of its most impressive wins in Army-Navy Game history on Feb. 18, 2017, when the Black Knights erased a 25-point deficit in the final 13 minutes of play to capture a 71-68 victory in Annapolis, Md. The historic win tied the largest comeback in NCAA Division I play that year, as well as being the largest comeback in Army-Navy men’s basketball history.

In 2016-17, Boisvert helped instruct Funk to Patriot League All-Rookie team accolades. The Warrington, Pa., native became Army’s eighth cadet-athlete selected to the all-rookie team in the last 10 years and first since the 2013-14 season. Funk started in every game for the Cadets, averaging 9.1 points, 4.8 assists, 3.0 rebounds per game. Another highlight of Boisvert’s first season was Funk and Jordan Fox each averaging over 4.5 assists per game. It made the Black Knights one of only three teams in Division I basketball to have two players accomplish that feat.

Boisvert, a Portland, Maine, native, arrived at West Point after two years at University of Maine.